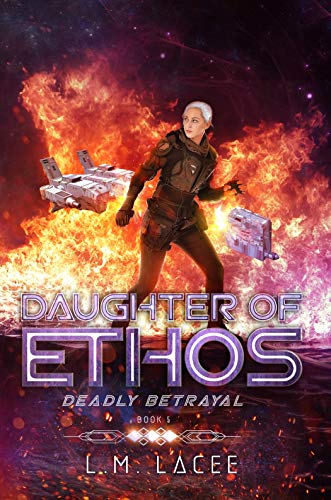 In this, the second to last book of the Daughter of Ethos series, we find out that Peyton has discovered the infiltration unit that was sent to the Capital, has run into difficulties.

After learning the Coalition is holding a Grand Meeting and has forgotten to invite Peyton, she decides she has no option but to crash the meeting. Hawk learns the Earth Government has sent Ambassador White and armed soldiers to the Capital to demand that the Coalition force Peyton to release all the females she is holding as prisoners on Maikonia.

Peyton is angered by their outrageous claims, and if they think she will willingly rollover and play nice, they have another thing coming. Her people are not pawns in the game the Earth Government and Coalition want to play.

Before they even arrive at the Capital, Prowler I is involved in a space battle and is victorious. Her arrival at the Capital is met with much resistance and armed soldiers. Undeterred, she and her people make their way to their newly established Embassy only to find Rita has been poisoned and the Menturians have not agreed to return home to Maikonia.

The day after they arrive Carrick is forced to defend Esther while out shopping when she and her guards are ambushed. When Peyton returns from her own unsuccessful shopping expedition it is to find, not only a standoff between her new Ambassador and Capital Governors with armed soldiers, but Kardan and Wolf have arrived and are standing shoulder to shoulder against the invasion of her Embassy.

There are several twists and turns in this exciting installment of the Daughter of Ethos series and Peyton’s adventures.

Perfect for fans of science fiction writers like Sarah j Maas and Rick Riordan. This exciting tale of courage, intrigue, and betrayal will keep the reader enthralled and turning pages well into the small hours of the morning.